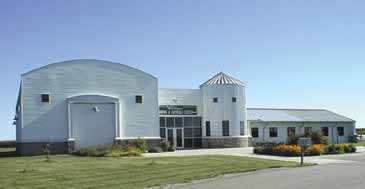 The Wallace Learning Center, completed in 1997, houses ISU Extension and research farm staff and is located at the Armstrong Research and Demonstration Farm. The Wallace Foundation was formed in 1990 to enhance agricultural research and education for southwest Iowa. The center and the Wallace Foundation, which owns the farm and the center, are named for Henry A. Wallace, former U.S. vice president and secretary of agriculture and commerce, who was born on a farm near Orient in Adair County, Iowa. Wallace was a member of a leading Iowa agricultural family, who started the Wallaces Farmer magazine. He also was a scientist, developer of hybrid seed corn and founder of the Pioneer Hi-Bred International, Inc.