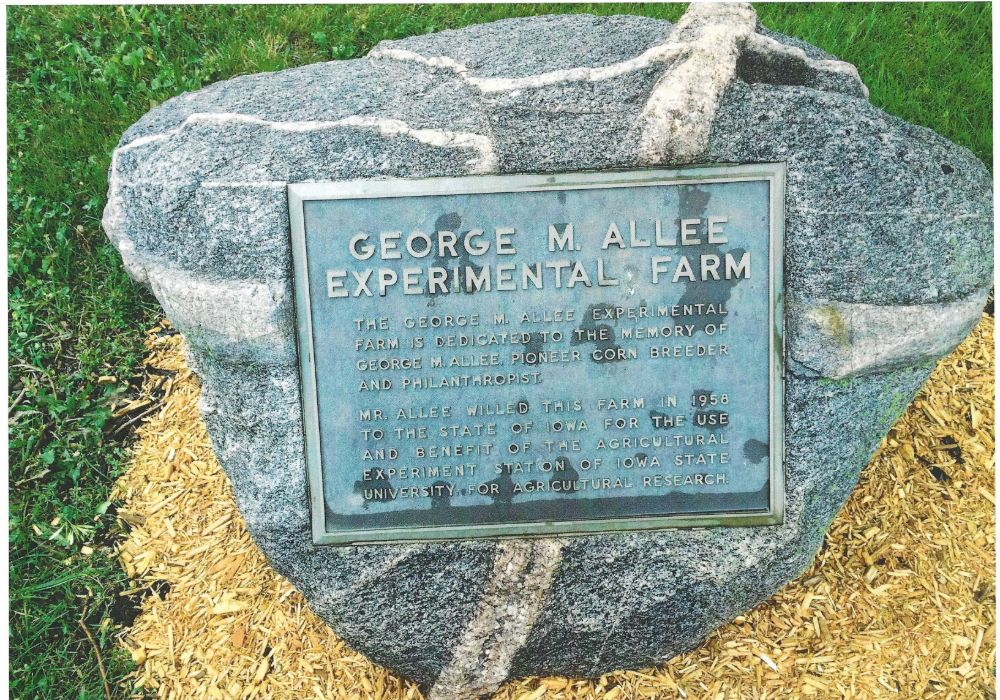 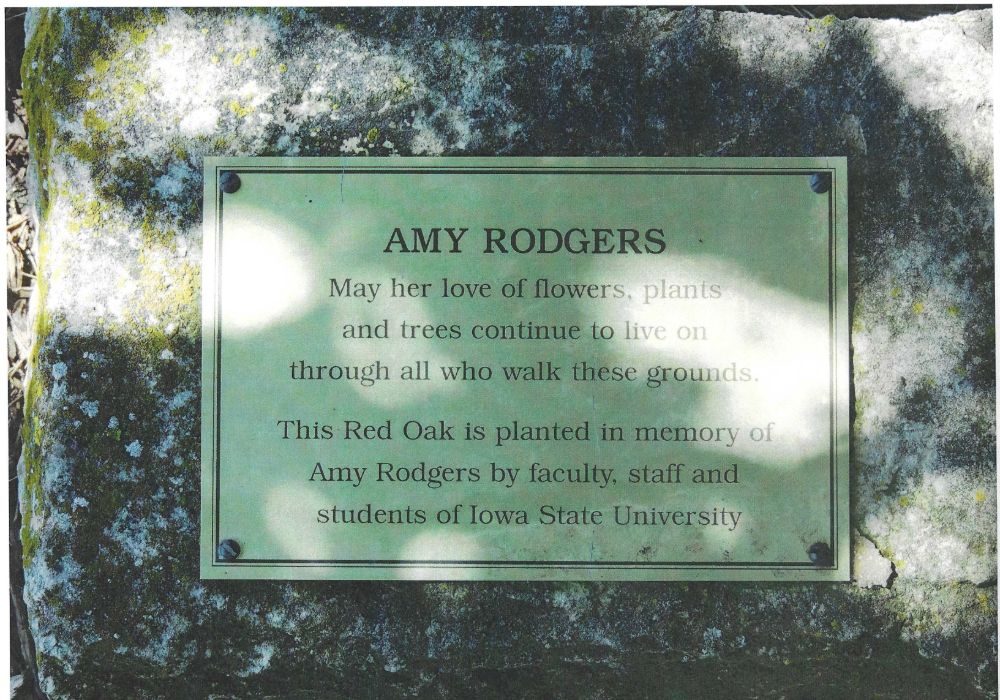 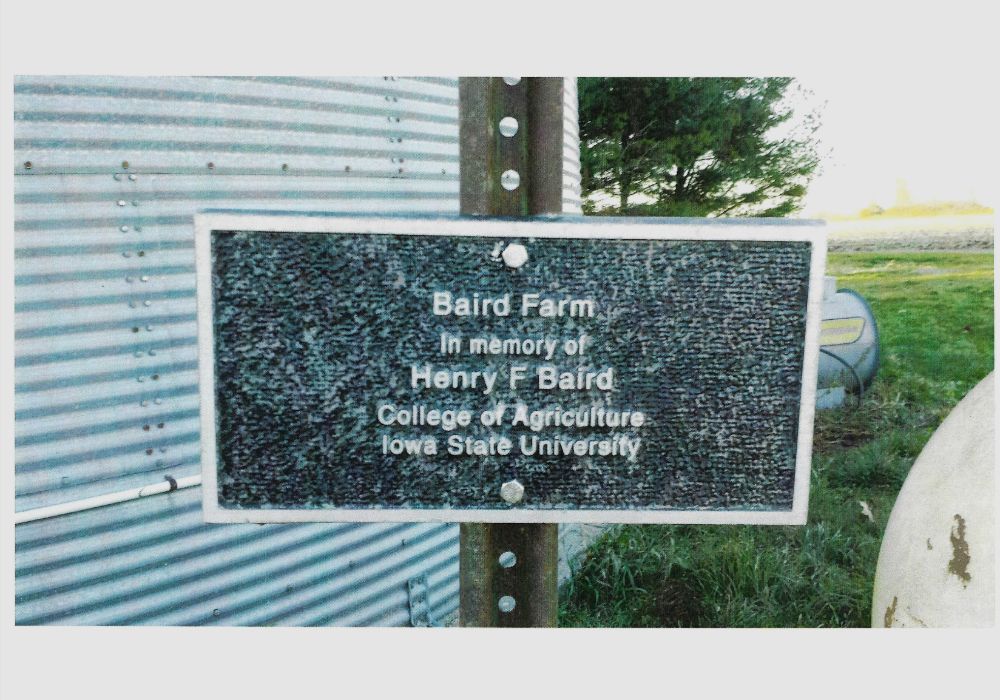 It is generally known that Mr. Baird operated a clothing store in Prairie City, IA.  He used the profits from the store to acquire farms during the Depression.  He had a son, granddaughter, and grandson-in-law who worked for ISU.  Location:  SW ¼ Sect. 21, T79N, R21W, Washington Twp., Jasper Co. 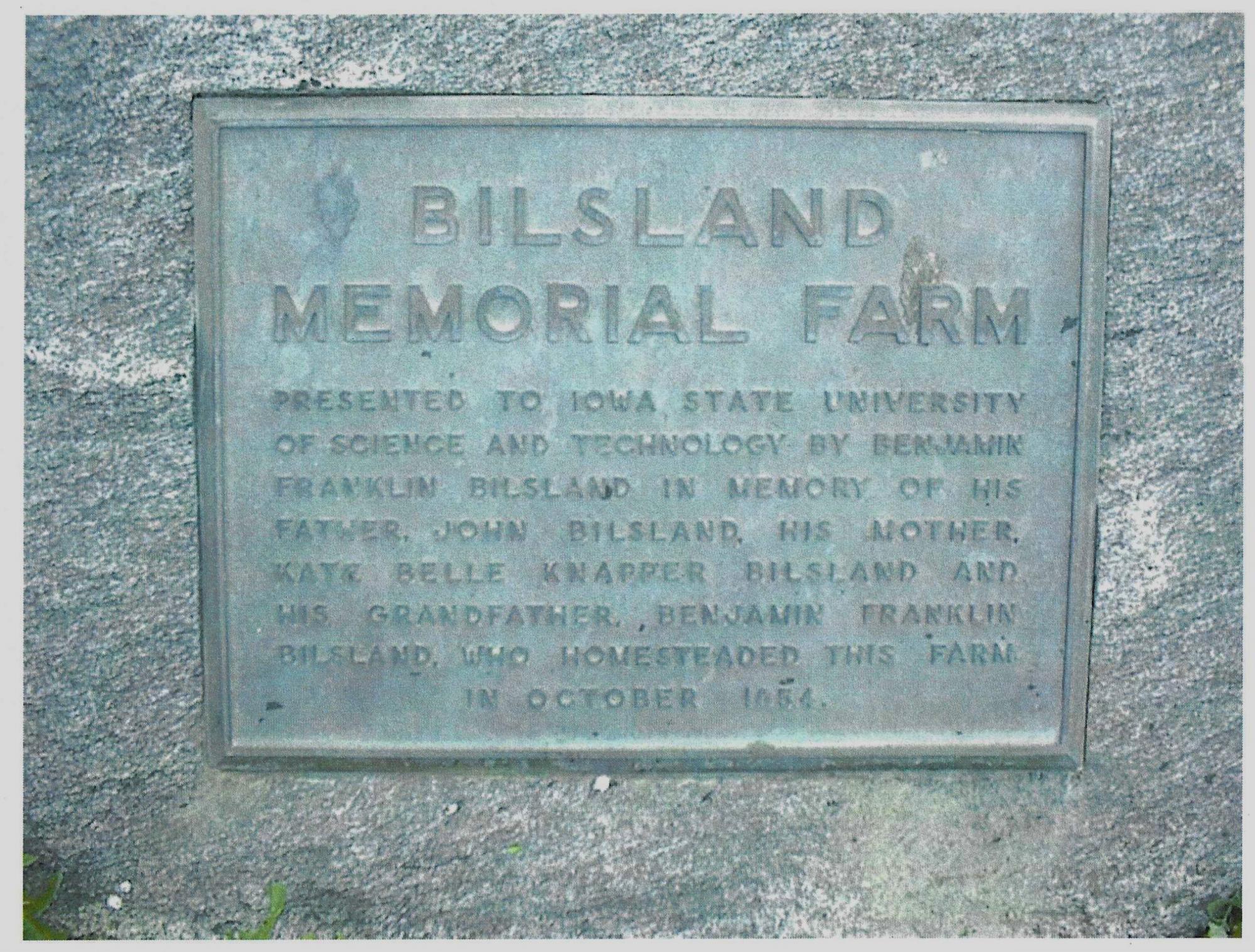 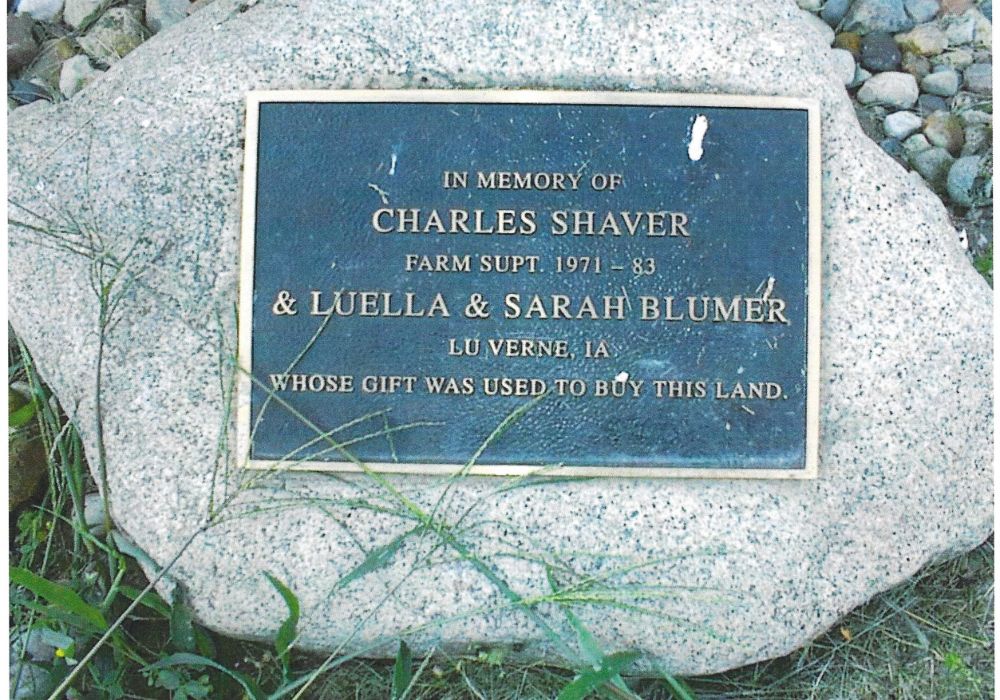 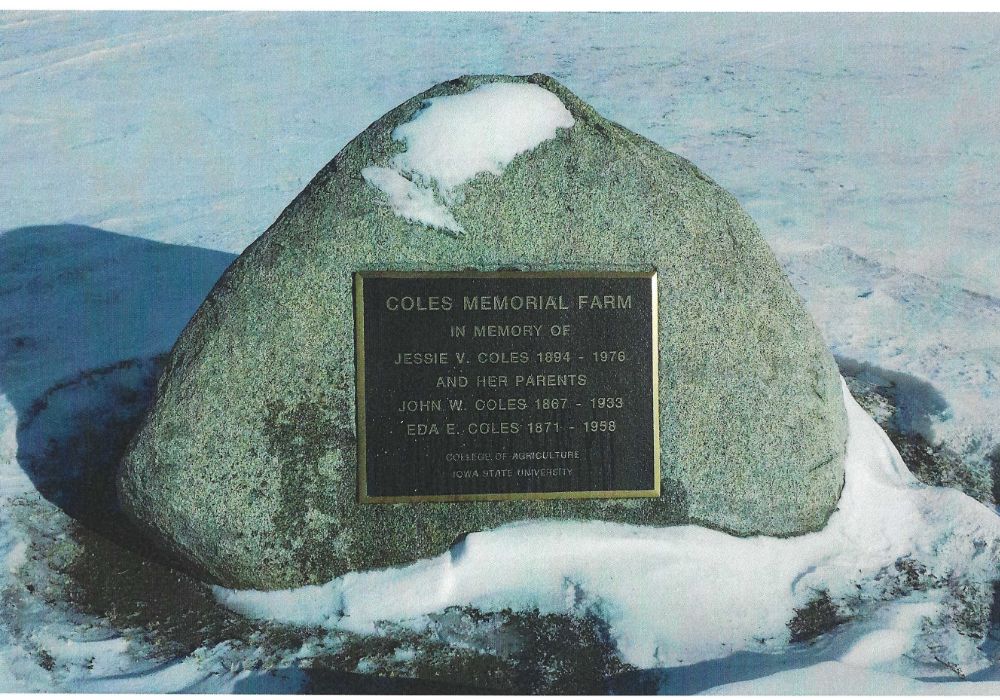 The farm was a gift to ISU in 1974 by Jessie V. Coles in honor of her parents John Wesley Coles and Eda Coles.  Ms. Coles’ letter to Dean Lee Kolmer in 1974 stated that, “It is my desire that the proceeds from your operation of the farm be used at your discretion to aid either research or scholarships in agriculture with due recognition of my parents.”  Location:  SE ¼ Sect. 26, T89N, R23W, Williams Twp., Hamilton Co. 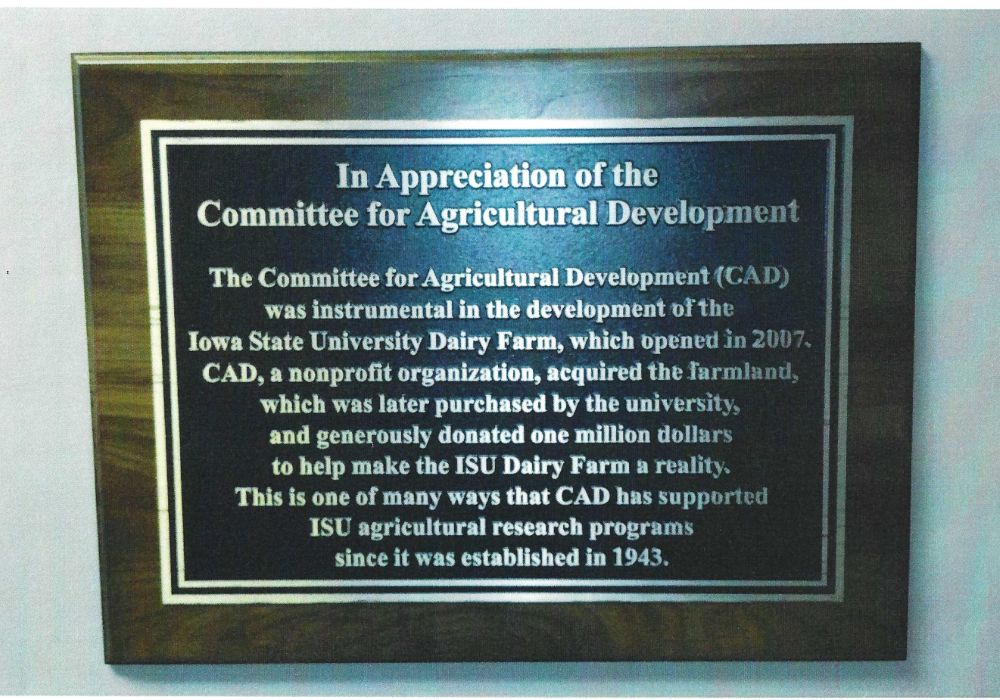 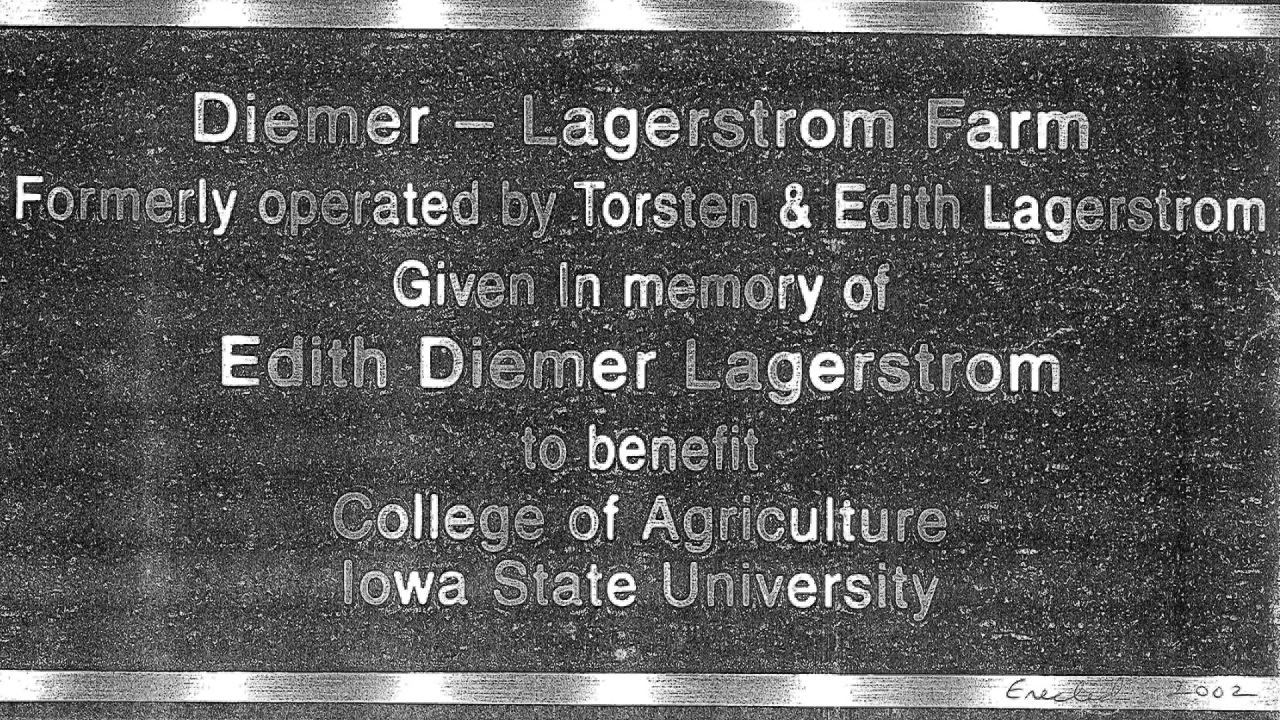 The plaque commemorates the gift of the farm in memory of Edith Diemer Lagerstrom. The farm is owned by the ISU Foundation.  Location:  NE ¼, Sect. 4, T96N, R29W, Union Twp., Kossuth Co. 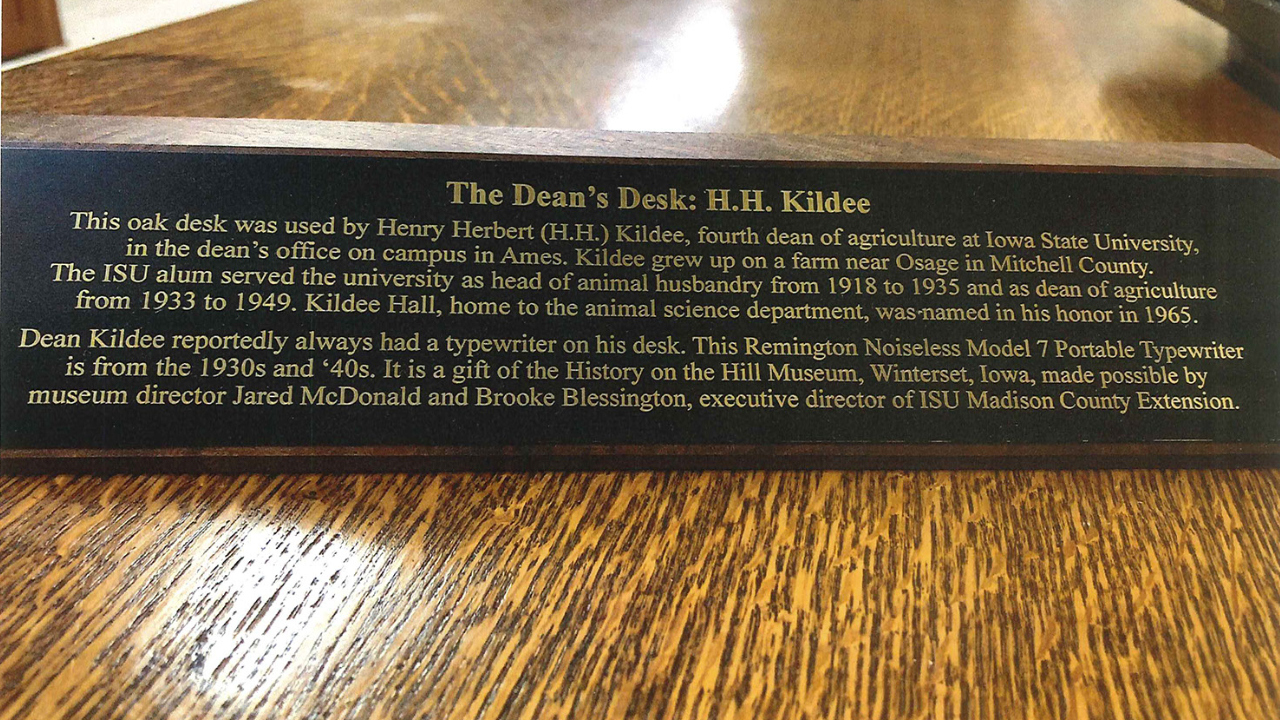 This oak desk was used by Henry Herbert (H.H.) Kildee, the fourth Dean of Agriculture at Iowa State, in his Curtiss Hall office on the Ames campus.

Teaching students and judging livestock were his passions. Kildee was a judge at every major livestock show in the United States and many abroad, judging all breeds of dairy and beef cattle, swine and draft horses. Kildee Hall on the Iowa State campus bears his name, and is home to the ISU Animal Science Department. 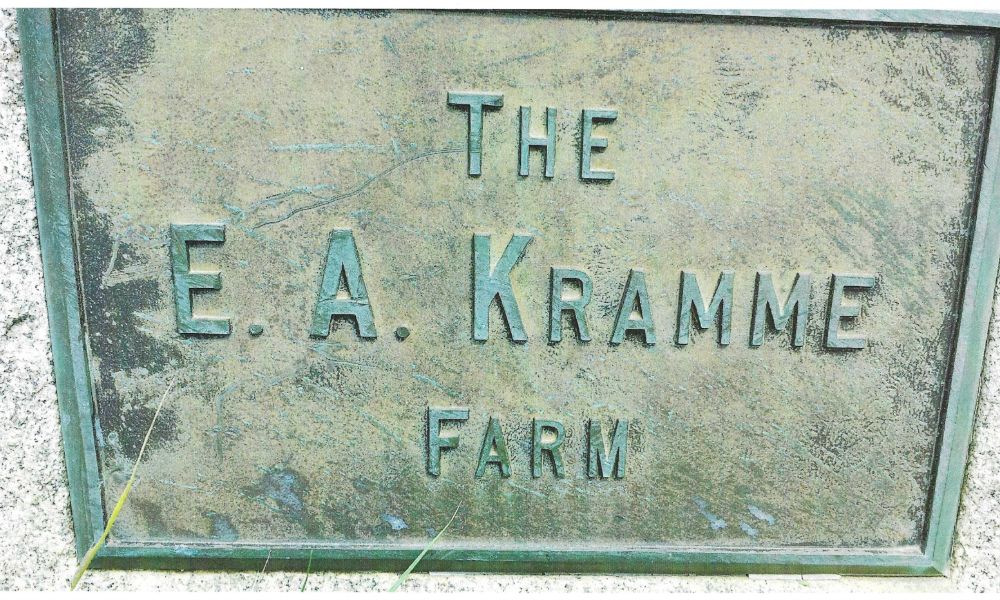 In 1960, land for the “new” Agronomy/Ag Engineering Research Farm was purchased by the Iowa Crops and Soils Association.  The acquisition included the Kramme Farm, the Olsen Farm, and Leonard Farm, which were contiguous and created a 400+ acre block.  Location:  NW ¼ Sect. 9, T83N, R25W, Colfax Twp., Boone Co. 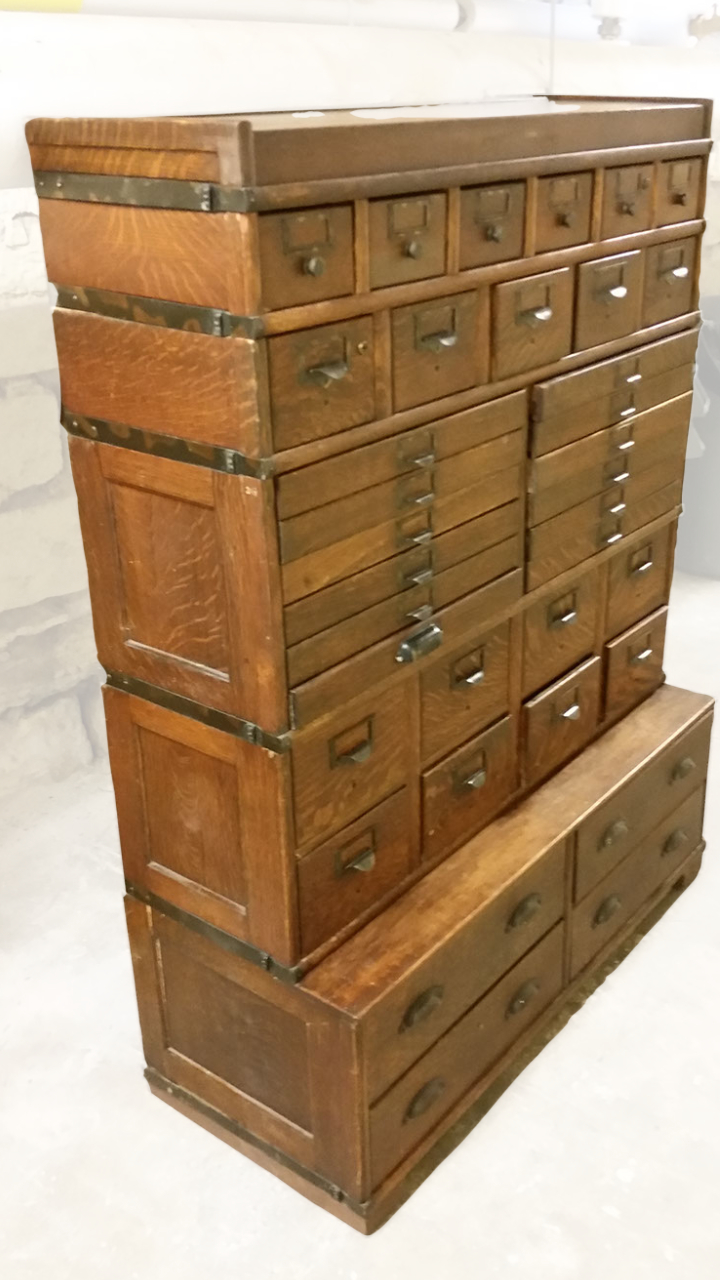 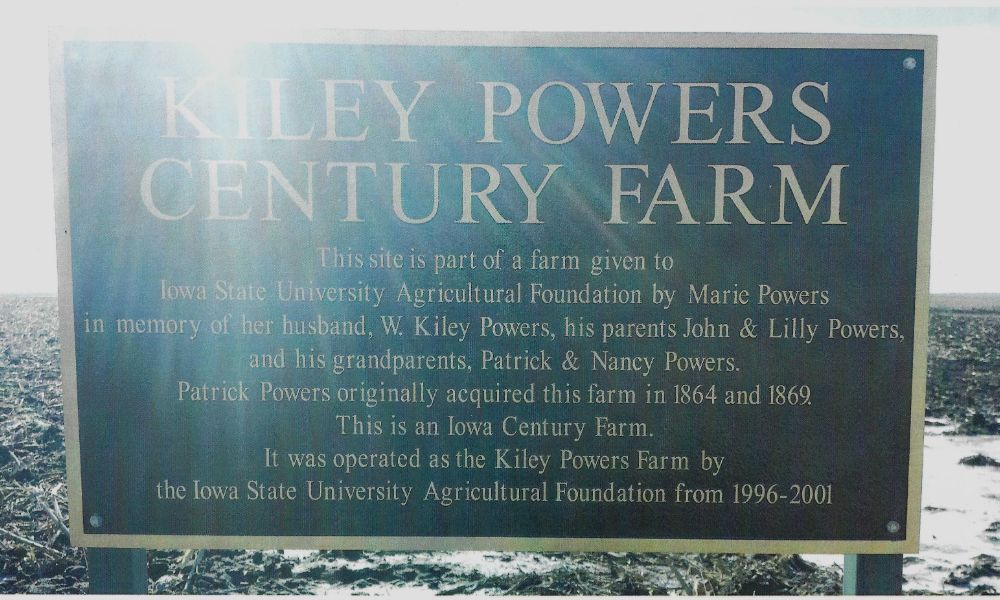 n 1996, the Powers family willed this farm to the ISU Agricultural Foundation.  The farm was later sold for the benefit of ISU.  Location:  NW ¼ NW 1/4 , Sect. 25, Washington Twp., T88N, R27W, Webster Co.  The plaque is bronze, approximately 3 ft by 2 ft with raised letters and weighs 85 lb.  It is mounted at eye-level on two galvanized steel posts set in concrete.  The plaque is parallel with the county gravel road in the fence line and is legible from the roadway.  It was erected in the fall of 2001 and paid for by the ISU Ag Foundation.  Erected cost was about $1,000.  The type of signage was selected for permanence and low maintenance.  It is analogous to a historical marker.  The buyer (a young farmer) of the Powers’ home farm refused to let the plaque be erected on the farm unless ISU or the Ag Foundation agreed to maintain the old buildings.  This was an unreasonable request.  He also expressed frustration with the controversy surrounding the Powers Farm.  He had hoped to buy the adjacent land, which he had been leasing from a niece of the Powers’.  The niece was vocal in the controversy, disgruntled that she was not offered the farm, and terminated his lease.  The sign is erected on the nieces’ property 4 inches from the property line and less than 600 yards from the Kiley Powers’ homestead.  It is on land originally owned by Kiley Powers’ father.  The wording and placement of the sign was approved by the Powers’ niece, Mrs. Ramona Lee of Ames. 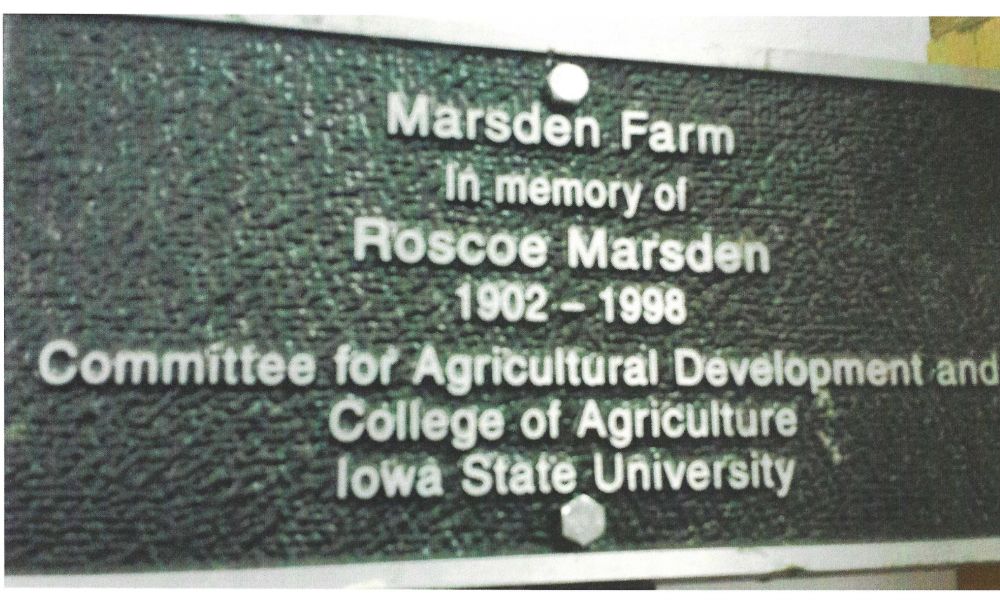 The farm was owned by Roscoe Marsden (1902-1998).  He bequeathed the proceeds of the 160-acre farm to ISU, Ames Library, and Mayo Clinic.  ISU Foundation purchased the farm at public auction and resold it to the Committee for Agricultural Development in 1999 for agricultural research.  The tract linked the ISU Ag Engineering/Agronomy Research Farm and the ISU Burkey Farm.

According to Roscoe Marsden’s obituary, he was born in Boone, IA to P.A. and Bunce Marsden.  He graduated with a degree in ag science from ISU.  He married Katherine Burns in May 1931.  She died in 1992.  He was past president of the National Corn Growers Association and traveled to 55 countries.  He served on the Story County Board of Supervisors and was a member of Rotary Club.  Location:  SE ¼ Sect. 8, T83N, R25W, Colfax Twp., Boone Co. 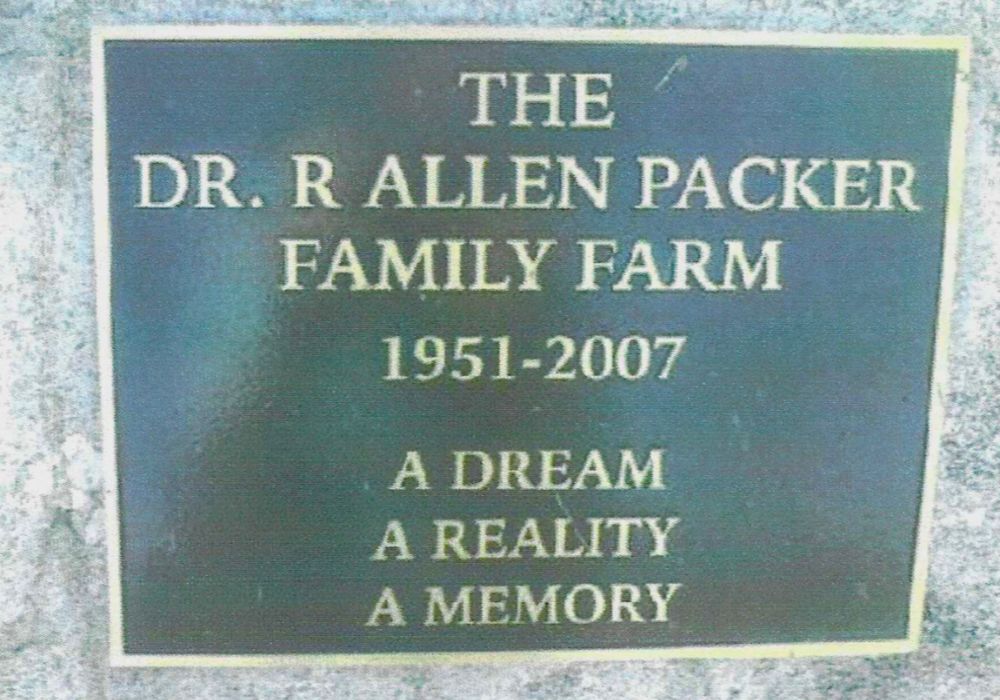 This land was acquired by ISU in 2007 from the Packer family.  R.A. Packer, DVM, was a graduate and long-time employee at the ISU College of Veterinary Medicine.  He and his family lived on the farm.  Location:  NE ¼ Sect. 16, T83N, R24W, Washington Twp., Story Co. 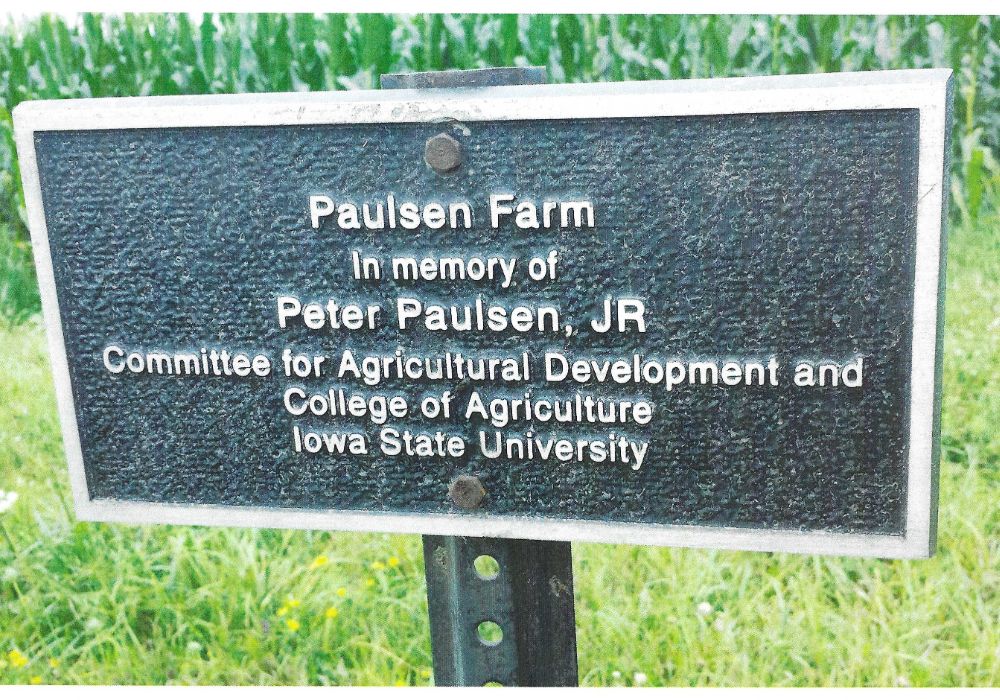 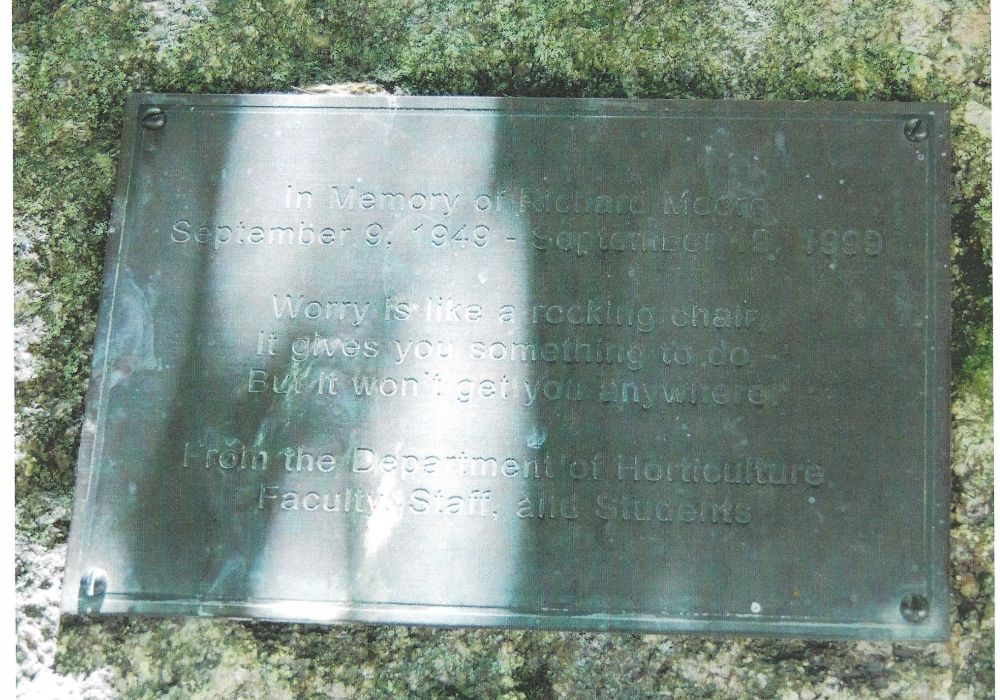 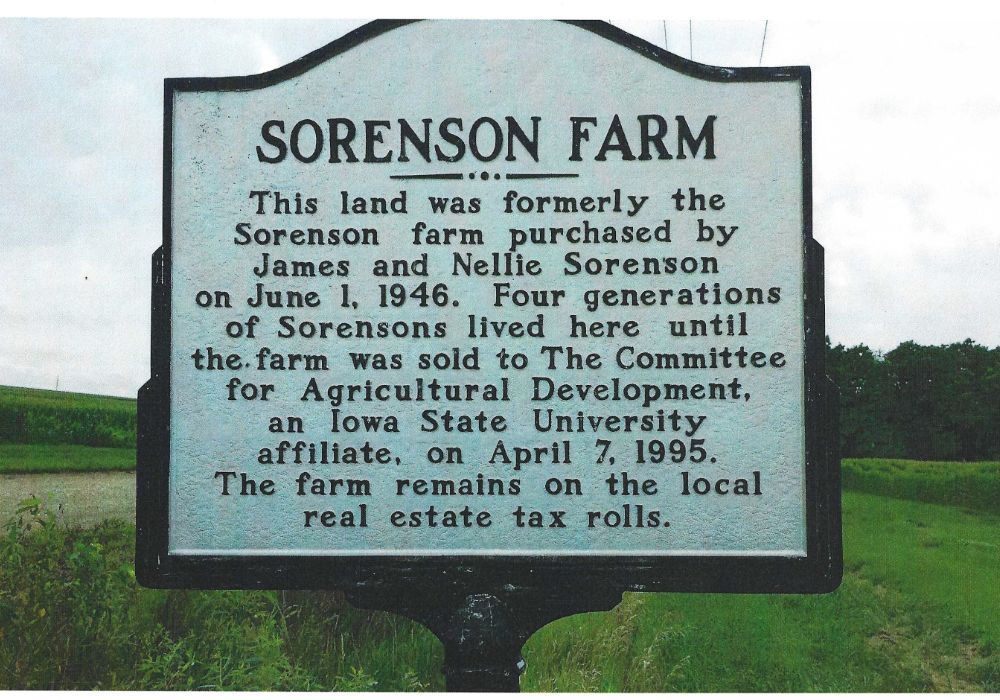 The farm was purchased by Committee for Agricultural Development in 1995 from the Sorenson family.  Location:  SE ¼ Sect. 10, T83N, R25N, Colfax Twp., Boone Co. 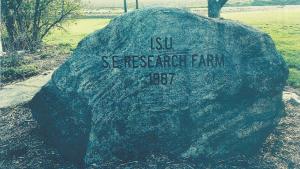 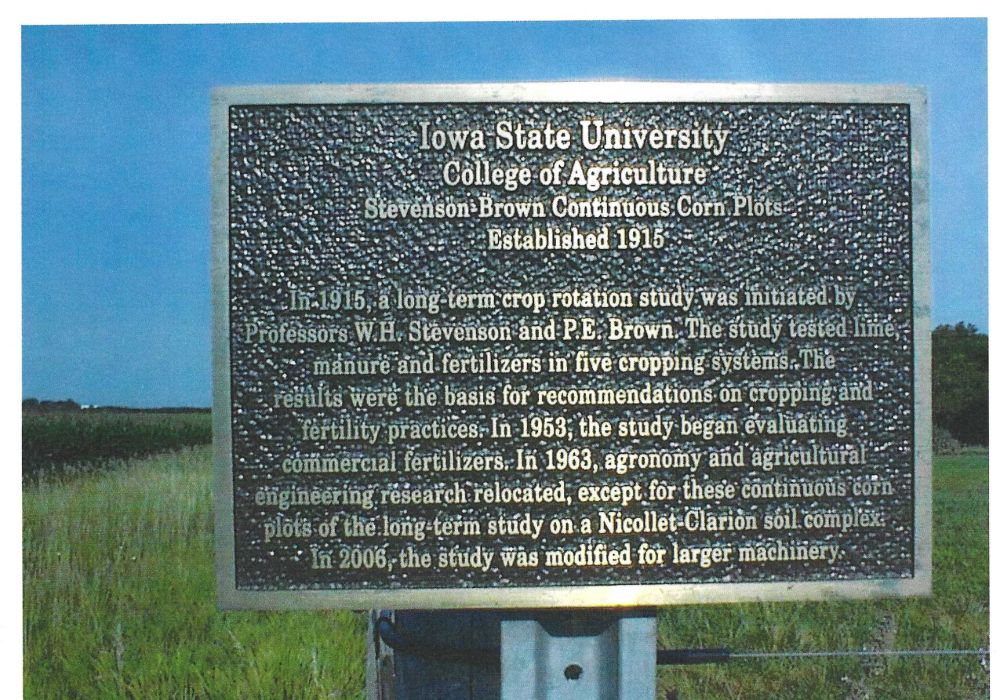 Iowa State College was rapidly expanding in the early 1900s, so the agronomy field research on campus was relocated south of Ames where adjacent Agronomy and Agricultural Engineering farms were established.  Professors W.H. Stevenson and P.E. Brown started a long-term crop rotation and soil management study in 1915.  The comprehensive study tested effects of lime, manure, and fertilizers in five cropping systems on crop productivity and soil fertility and covered several acres and soils.  The results became the basis for Iowa State recommendations to farmers on cropping and soil-amending practices during the first half of the 20th century.  The information was beneficial to farmers striving to improve their farming operations.  Location: NW ¼ Sect. 20, T83N, R24W, Washington Twp., Story Co.

In 1953, the study was changed from a test of lime and manure to evaluate only commercial fertilizers.  In 1963, agronomy and agricultural engineering research was moved to a new site in Boone County, except for these continuous corn plots of the long-term study on a Nicollet-Clarion soil complex.  Herds and flocks for teaching animal science occupied the vacated land.  In 2006, the study was redesigned to accommodate larger machinery. 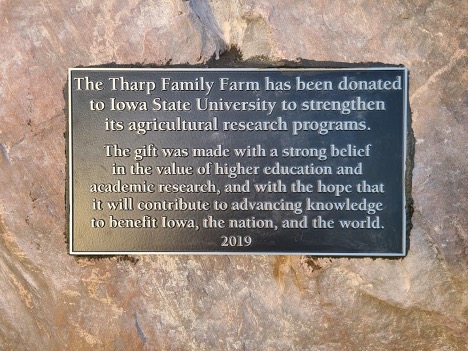 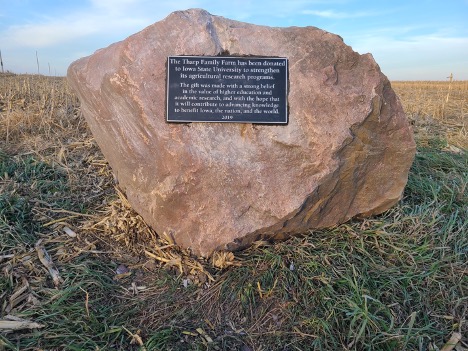